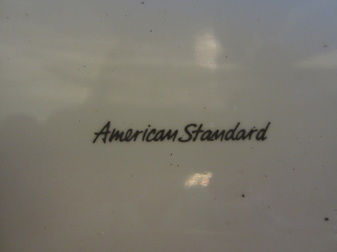 American Standard is one of the most popular toilet/urinal manufacturers.

In 1875, Standard Manufacturing Company was founded by James Arrott and Francis Torrance. They made some plumbing fixtures, including cast iron toilets. The company was based in Pittsburgh, PA.

In 1901, Standard became the most popular company for plumbing fixtures.

In 1929, Standard comes out with acid resistant enamel, for plumbing fixtures.

Also in 1929, Standard purchases several companies, including, but probably not limited to: Church Seats, and Thomas Maddock & Sons.

In 1939, many of American Radiator & Standard Sanitary's manufacturing plants had been converted to wartime production.

In 1941, all of American Radiator & Standard Sanitary's manufacturing plants had been converted to wartime production. Civilian production was halted. It is unknown if this stopped at the end of the war in 1945, or before then.

In 1942, American Radiator & Standard Sanitary was forced to use less metal because of World War II, so cast iron fixtures were not being made and tank parts might have been made with porcelain.

In 1948, American Radiator & Standard Sanitary was renamed to American-Standard.

In 1950, the logo was changed to say American-Standard.

In 1968, the hyphen was dropped from American Standard.